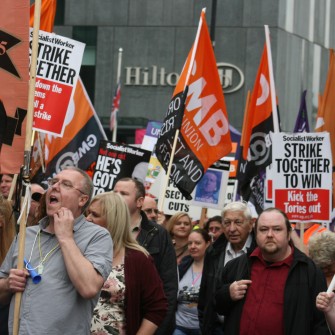 Thousands of public sector workers went on strike on Thursday as part of an ongoing dispute with the government over cuts, pay and pensions.

Firefighters, librarians, and council staff were among more than a million strikers with several trade unions taking part in rallies across the UK.

Thousands of pupils missed lessons as many schools shut across Britain while there were disruptions at several airports due to border control staff striking.

Union leaders have been blamed for the strikes by the Cabinet Office although a government spokesman said “most public sector workers had reported for work and “nearly all key public services were being delivered as usual”.

One of the main issues revolves around pay after ministers froze public sector salaries in 2010 and introduced a one per cent cap on pay rises in 2012 which remains in place.

Brian Strutton, GMB national secretary for Public Services, said “From ringing around GMB regions and branches our information is that over 1 million workers are on strike in councils and schools.

“The majority of schools are closed or partially closed. Council services are significantly affected. However a number of our members have been released to work so that we do not endanger life and limb.

“But the bottom line is that there are more people on strike than just union members and we’ve been overwhelmed by the support. Local council and schools staff, union members or not, are very angry and it’s time someone listened. ”

Other rallies were held in Sheffield, Birmingham, Newcastle, Swansea and other cities.

Picket lines were also mounted outside courts, council offices, job centres and fire stations across the country as well as outside the Houses of Parliament.