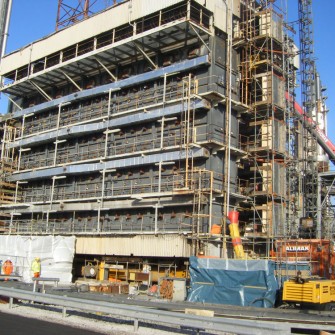 A construction company in south west London has been fined £12,500 for exposing its workforce to serious dangers on a building site in Holland Park.

Several serious risks were identified during a visit by Health and Safety Executive (HSE) inspectors in November last year as part of a nationwide campaign by HSE focusing on basement construction works.

HSE had found a catalogue of safety failings at the Stach Ltd site that related to the risks of workers falling from heights of between two and five metres, including: –

• Unnecessary work being carried out over a skip, two metres above passers-by and street traffic, with no means to prevent falls.

Westminster Magistrates Court was told that similar prohibition notices had been served on the company for work at the same site only two months before the November inspection.

Despite the notices, the court was told that Stach Ltd had not taken sufficient and consistent action to raise its safety standards.

Stach Ltd, of Granville Road, London, SW19, was also ordered to pay £1,698 in costs after admitting to a breach of the Work at Height Regulations 2005.

After the hearing, HSE inspector Stephron Baker Holmes said: “Although there was no injury that prompted the prosecution, that is more a matter of good fortune rather than good management by Stach Ltd of their building site.

“The failings identified were numerous and serious, but could have been remedied quite simply. The cost would be modest, but the benefits in terms of potential for saving life and limb are significant.

“The earlier enforcement action ought to have served as a warning to the company that it needed to improve its management of work at height. Instead, workers were again exposed to unacceptable levels of risk.”