UnionLine is ABS of the Year at Modern Law Awards

UnionLine, your trade union law firm, was announced as ABS of the Year – 26-100 employees at last night’s Modern Law Awards.

UnionLine triumphed over fierce competition from Convey Law, Jigsaw Law, LA Law Limited and Legal Recoveries & Collections Ltd, in the category which recognised the successful development of the business over the last year.

The winners of the prestigious awards were announced last night at a ‘Great Gatsby’ themed ceremony, hosted by comedian Jimmy Carr at The Hurlingham Club, London.

UnionLine’s work as a not-for-profit, no deduction law firm for union members was recognised by the panel of judges, made up of 17 experts from the legal industry.

Matt Cordall, Head of Legal Practice at UnionLine, said: “To even be shortlisted for an award within 16 months of UnionLine opening for business is an amazing accomplishment. To win, against such fierce competition, is all the more rewarding.

“This achievement is testament to the hard work and determination of everyone involved in UnionLine. As the first union-owned ABS in the country, we are proud that our work for the 850,000 members and families we support has been recognised in such a way.

“These awards reflect the dynamism and progress of the legal services industry as a whole, and every company shortlisted deserves our congratulations for what they have achieved.”

The Eclipse Proclaim Modern Law Awards were launched three years ago, to celebrate talent and success in entrepreneurship, market development and best practice in the modern legal services arena.

UnionLine was also shortlisted in the Best Use of Technology category, along with the National Centre for Domestic Violence, Selachii LLP, Smart Credit Ltd., The Partnership, and the winners, Schillings. 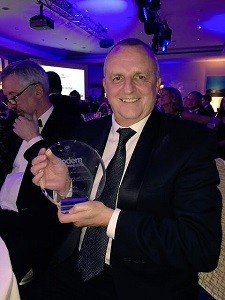 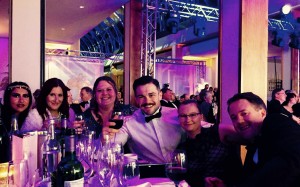 Some of the UnionLine team celebrate at last night’s awards, and left, Tony Rupa, UnionLine board member and head of legal services at CWU, with the award