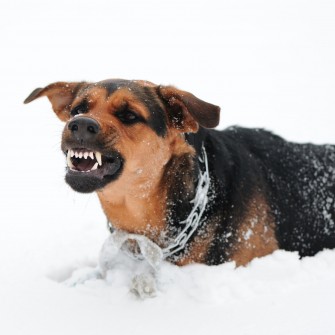 There will be many activities taking place during this week, including Royal Mail postal workers speaking about their own experiences of dog attacks, and dog wardens visiting delivery offices to give safety talks to workers. Posters will be displayed in Royal Mail enquiry offices giving dog owners tips on what they can do to help.

There has been a 10 per cent reduction in dog attacks on postal workers over the past year, but despite this an average of seven attacks still occur each day in the UK. In the past year, there were more than 2,600 reported attacks.

The Communication Workers Union is supporting the campaign. Dave Joyce, the union’s national health, safety and environment officer, said: “This figure is unacceptably high. Through initiatives such as Dog Awareness Week, we want to keep on driving those figures down.”

Research released on Monday revealed that 27 per cent of parents who own a dog have had their pet loose in the house when an outside door was open.

In the past year, 36 per cent of dog attacks on postal workers happened at the front door, while 35 per cent took place in the front garden.

“Most dog attacks on postmen and women occur at the doorstep of the owner’s home. The vast majority of our customers and their dogs aren’t a problem, but we want to make sure all owners fully understand the simple precautions that can prevent the pain for everyone concerned,” Mr Joyce continued.

Dr Shaun Davis, Royal Mail Group Director of Safety, Health, Wellbeing and Sustainability, said: “Our postmen and women deliver to over 29 million addresses across the country. We ask them to exercise caution and respect for all family members, including pets, when delivering the mail.

“This summer, we are also appealing to dog owners and their families to help reduce the number of attacks, particularly at the door and in the garden.”

There is an increase of 10 per cent in the number of attacks which occur during the summer holidays, when children and parents are at home and dogs are more likely to be out in the garden.

Royal Mail has released tips for dog owners to ensure their post can be delivered safely. These tips include giving a dog some food or a toy to play with while the post is being delivered, installing a wire letter receptacle over the letterbox or putting a letterbox outside the property, or simply keeping the dog in the back garden or a faraway room while the post is delivered.