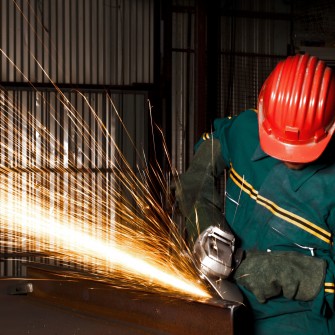 An engineering company has been sentenced after a worker was injured while operating a drilling machine.

Wolverhampton Magistrates’ Court heard that the man was injured while carrying out work for KV Welding, which manufactures equipment for the logistics sector.

The worker was operating a pedestal drilling machine to drill holes into some box section tubing. He was adjusting his work while the drill was still running, when his gloved hand became entangled with the unguarded drill bit.

His arm was pulled around the drill, and he suffered two broken bones in his right forearm. He required a skin graft on the arm as a result of his injuries.

The Health and Safety Executive (HSE) told the court that the injuries could have been prevented if the drill was guarded with a telescopic guard covering the rotating drill bit, and if the man had not been wearing gloves. The HSE also said that a sufficient risk assessment had not been completed and that the employee had not received proper training.

HSE inspector, Richard Littlefair, said: “It is vital that companies understand the importance of using suitable guarding when employees are operating drilling machines as there are significant risks involved which may lead to serious personal injury.

“Other simple measure such as not wearing gloves can be taken to eliminate the risk of entanglement involved with operating drilling machines or any other machinery with moving or rotating parts.”